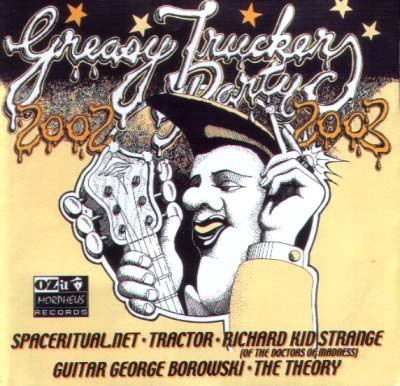 Another legend wanders back into view with the release of Greasy Truckers Party 2003 (Ozit, UK). The original Greasy Truckers, of course, was a mini festival staged in London in the early 1970s, featuring the likes of Hawkwind and Man. Thirty years later, the concept is reborn around one of the original participants, as an army of former Hawkwind members reconvene as SpaceRitual.net and restage the festival once again.

Lining up with alumni such as Nik Turner, Dave Anderson, Terry Ollis, Mick Slattery, and Del Dettmar, all members of the earliest Hawkwind lineups, SpaceRitual.net blister through versions of Hawkwind’s “Brainstorm” and “Children Of The Sun” and Turner’s “Sonic Savages.” They are followed onto disc by fellow free festival regulars Tractor, former Doctors Of Madness frontman Richard Strange, and two relative newcomers, Theory and Guitar George Borowski — whose latest album, Check Out Guitar George (He Knows All The Chords) borrows its title from a Dire Straits song but draws its energy from a career that dates back to the days of the Manchester punk band The Out.

Greasy Truckers Party 2003 is an exhilarating listen — the Strange cuts, which feature two songs from the second Doctors album, Figments Of Emancipation, plus an excerpt from their singer’s autobiography, are especially welcome, while Tractor are still churning up as much magic as they ever did. Whether the reborn Greasy Truckers will ever take on the same legendary aura as their predecessors is a question that time alone will answer. But anybody who has fond memories of the original albums — or who just fancies revisiting the vibe of an earlier age — will certainly not regret picking up this disc.