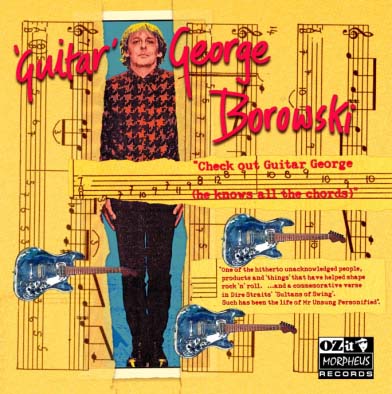 "Check Out Guitar George (He Knows All The Chords)"

Legendary Manchester and North-West guitarist and songwriter Guitar George Borowski has spent the last three years recording this excellent new album. When George was guitarist in Manchester band The Out - their version of George's song 'Who is Innocent' was continually played on the radio by John Peel. There is a new version - Track 15 on this new album.

Q MAGAZINE - "Guitar George Borowski, one of the hitherto-unacknowledged people, products and 'things that have helped shape rock'n'roll… and a commemorative verse in Dire Straits' 'Sultans of Swing' - such has been the life of Mr. Unsung Personified."

TEENAGE FAN CLUB's Norman Blake - "The songs on this album from George are the best that he has written, and I know that you are going to love them just as much as I do."

FRANK BLACK of THE PIXIES - "I have never seen a rock'n'roll performer so completely connected with what he was doing onstage."

TERRY CHRISTIAN of THE WORD - George has an uncanny ability to straddle the divide and deliver a message to all camps."

JIM GOODWIN of DOVES - a unique singer-songwriter with a righteous howl: "I decided after seeing guys like George that this was the life for me."