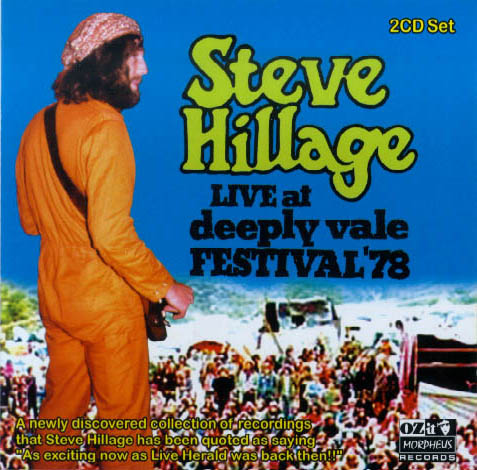 Talk to any connoisseur of 70s-era double live albums, and many will agree that Steve Hillage’s "Live Herald", recorded and released in 1977-78, rates among the finest jewels that the genre has to offer. So it’s astonishing to discover that someone has spent the last 25 years sitting on tapes that knock that set into the dust, both in terms of on-stage excitement and aural enjoyment. "Live At Deeply Vale Festival 1978" (Ozit, UK) transports the listener back to one of the last truly great festivals staged in the UK that decade, a weekend’s worth of music that fearlessly ranged across both the traditional rock range and the upcoming punk movement, before climaxing with a Hillage set that the guitarist himself reflects, “…[sounds] as exciting now as Live Herald was back then.”

Hillage’s performance, of course, dominates the disc, spreading across one CD and then halfway across another. But, if that’s the main attraction, the supporting cast is just as exhilarating. The full concert is followed first by reprises of four songs recorded from the audience, and offering up a surprisingly different view of the proceedings; then come a collection of stage announcements, before the Ruts take the stage for a ferocious “Babylon’s Burning”, and the package wraps up with three songs by Tractor, mainstays of the modern Ozit label, of course, but one of the brightest sparks on the early 70s British underground as well. This was one of the group’s last major performances before they faded away – however, 20,000 people left Deeply Vale with the band’s presence burned firmly into their minds, and the performance here offers up a glowing testament to their memories.